I began doing `Thames Rituals’ back in 2006, after `discovering’ that one can get down to the shores of the river on low tides. These rituals took place at the 8 seasonal times of the Pagan calendar, some full moons, and definitely at days of Solar or Lunar Eclipses.

I’ve been fascinated by the shape of the river Thames (sky view of it..shows it like a snake..) and had always `invoked’ the Tamesa Serpent by calling it 3- times before any ceremony.

The logo of TLC (Tamesa London Circle) is a serpent carrying the `Moon child’ – which symbolises our inner-self being carried by the great Tamesa serpent…the great mother. 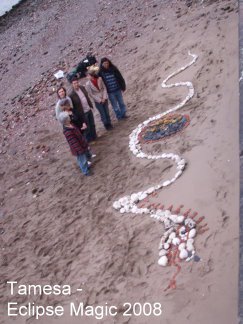 Back in 2008, members of the Tamesa ritual team created a `large snake’ on the banks of the river, Thames for a special Eclipse Ritual. We used a variety of stones, pebbles, bones, old bricks, tiles and such that were found on the shores to create this colourful physical sculpture. Following that, we did a magical ritual and then simply left the image on the shores, just as the Thames tide was coming back up. The idea was that as the tide came and washed away the magical design, it would also take into itself the `thought-form’ and energies we had laid on it, and sweep the energies to the Sea!

Recently (July) during some Isis rituals by the Thames, we `gave initial respects to the `Tamesa Serpent’ with the customary `calling’ I had devised years ago. (ie calling `Tamesa’ 3-9 times). It had always been done with trust .. before moving on to other parts of the ritual.
So imagine my surprise (and joy) when a psychic friend said she `saw’ a giant snake rolling in from the left, watch us and head off .. 🙂
Tamesa serpent is alive and well.. and perhaps one day soon, as part of the `Pythian Temple London’, we’ll do a special serpent ceremony for Tamesa..by the banks of river Thames.